Cookie preferences
This website uses cookies, which are necessary for the technical operation of the website and are always set. Other cookies, which increase the comfort when using this website, are used for direct advertising or to facilitate interaction with other websites and social networks, are only set with your consent.
Configuration
Technically required
These cookies are necessary for the basic functions of the shop.
Allow all cookies
CSRF token
Cookie preferences
Currency change
Customer-specific caching
Decline all cookies
Individual prices
Selected shop
Session
Comfort functions
These cookies are used to make the shopping experience even more appealing, for example for the recognition of the visitor.
Note
Statistics & Tracking
Affiliate program
Track device being used
Categories 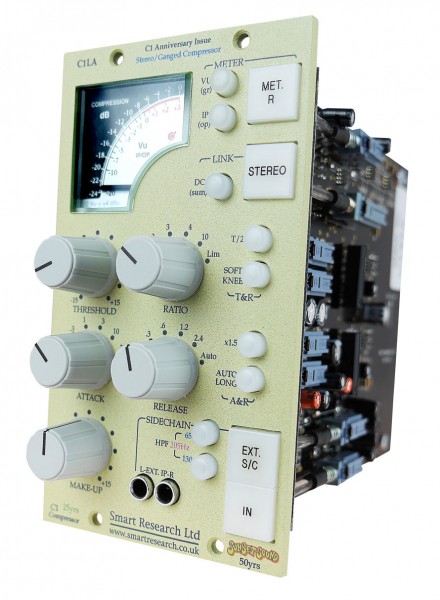 * All prices including 19% VAT plus Shipping . Customers in the EC with a valid VAT-number or customers outside the EC will be delivered net without 19% VAT

The Smart Research C1LA is a two channel Compressor/Limiter, released to commemorate the 25th anniversary of the original C1 Stereo/Dual Mono unit. It is a versatile unit, housed in a two-module wide 500-series plug-in format, with three main modes of operation offering a range of possibilities. It can be used for all stereo or single channel signal applications: as a main mix bus compressor; for submixes; or for tracking either mono or stereo sources.
For 25 years Smart Research compressors have been used across many mixes: with artists as diverse as the Rolling Stones to the Three Tenors. The C1LA shares this history by including the same electronics and settings as the original C1, but with several new features.
A Tri-Mode C1
Each channel can either be used independently, or in Stereo mode both are summed into the sidechain to eliminate any image shift, as in the C1. The C1LA also has the ability to DC-Link the sidechain signals in Stereo mode, allowing for more movement, while still preserving the stereo image. And for those who prefer to compress both sides of a mix without linking: when operating independently both channelʼs controls are ganged.
Mix Glue ?
The essence of the C1LA sound is determined by its dynamic performance: the way it reacts around transients creating its signature. In many situations, best results can be from medium-slow attack; and mediumfast release settings passing transients present in a signal. The compression law and timing as the sidechain reacts and recovers adds ʻpunchʼ by shaping the transients, whilst also controlling overall levels. The ʻSOFTʼ mode in the C1LA also adds a new compression curve, acting not just at the threshold knee, but across a broad input range of about 15dB.
Features
• 3 operating modes: Independent/ganged; Stereo linked/Sum; and Stereo Linked/DC
• Meter: Input, Output, (VU) and Gain Reduction (PPM) for L or R
• 3 sidechain filters : 65, 130, or 205Hz
• Automatic distortion null circuitry
• Normal and half-threshold ranges
• ʻSoftʼ compression curve reshapes a 15dB range
• Total of 12 Attack and 12 Release settings
• Total of 4 ʻAutoʼ settings
• Dual, balanced bantam jacks for external sidechain inputs
• All settings and circuitry from original C1 Dual/Stereo Compressor

recently viewed
This website uses cookies, which are necessary for the technical operation of the website and are always set. Other cookies, which increase the usability of this website, serve for direct advertising or simplify interaction with other websites and social networks, will only be used with your consent.
Decline Accept all Configure